Termites The Most Destructive in Brisbane, gold Coast, Ipswich, Logan

Termites The Most Destructive in Brisbane

Termites or white ants . Firstly We will show you the most destructive termites from Number one to the least destructive types in Australia and South East Queensland.

Firstly There is only two major destructive types of termites in South East Queensland. and we have listed them below. These species contribute to most of Australia's yearly billion dollar damage bill.

Subterranean Termites live and travel under the Ground and can eat Your house out in a very short Time.

Both Subterranean termites and White ants are actually the same thing. In fact termites are actually related to the good old Cockroach but they do resemble ants Hence the term White Ants . Termites are a highly destructive timber pest, causing major structural timber damage to buildings in Australia. In Fact termites cause 1.5 billion dollars worth of damage annually.

This is why you can't get insurance against termite damage. Your Home or Building Insurance Policy will NOT cover remedial and repair costs of damage caused by termites to structural and decorative timbers in a building . A CSIRO Survey indicates about 1 in 3 Properties have termites within the property boundary . Additionally they have been known to destroy all walls and roofing timbers of a home within 3 months of construction. Just imagine your new home getting destroyed within a few months of you moving in. Furthermore they cause more damage to homes in Australia than fire, floods, storms and tempest, combined. So you can see why the insurance companies won't cover damage caused by these destructive pests.

Termites occur throughout mainland Australia, with a high rate of attack in all  areas.

The Number One Destructive Termite in Brisbane South East Qld and Australia.

Coptotermes found during a annual inspection

These guys aren't the most aggressive but are pretty close to the top.  Coptotermes cause more damage than any other species. Coptotermes is the most widely distributed termite in Australia. And occurs throughout the country with the exception of Tasmania. Some parts of coastal Victoria. And a few other areas with high rainfall. They can have colonies numbering in the millions and that is a lot of mouths to feed. With the Queen laying up to 2000 eggs a day . Now that is very impressive and imagine trying to feed this lot.

coptotermes entering through the subfloor

Damage found during a Termite inspection . The Coptotermes come up through the subfloor, destroyed the walls and roof timbers.  The treatment used for them was Termidor Foam which eliminated them out of the building.  The next step was to install a chemical barrier using termidor. 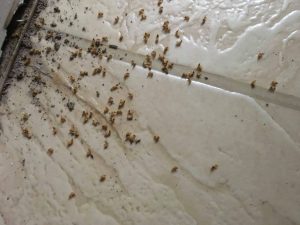 dead Termites after a foaming Treatment

In the picture below the termites had got into the home from the palm tree. The palm tree was leaning against the house . 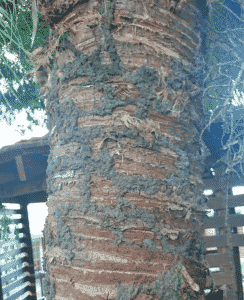 Coptotermes got into a home via this palm 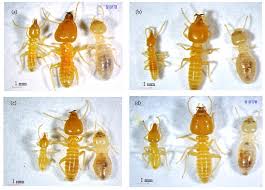 Picture shows major and minor soldiers which tells us it is a very mature colony and would contain millions of termites.

Schedorhinotermes would be one of the most destructive in australia and would rank ahead of coptotermes but they aren't as wide spread. This species can devour your home in a very short time once established. In brisbane it would probably rank number one as we find them more often than coptotermes . 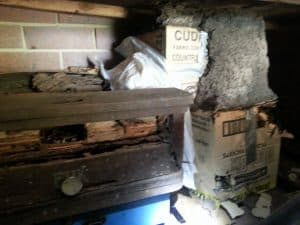 As you can see in the picture above a subnest was in a storage area in the subfloor of this home. The owner had only checked this area a few months previously. So within a few months they had set up a sub nest and just got into her home. If left unchecked they would have destroyed the whole home. The treatment used was termidor dry dust . Due to the construction of the house we couldn't use a chemical barrier.

So we used Sentricon Always active termite baiting system. Sentricon  In-Ground baiting systems have the Termiticide Rods always in the stations. This protects your home from termites and have the benefits of both chemical barriers and bait stations, without any of their drawbacks. The termites consume the bait which in turn stops them from re growing their outer shell after shedding . Also their mandibles become soft so they can no longer consume timber. This causes the total collapse of the colony. As they no longer can feed each other and more importantly the queen and she can no longer produce eggs. 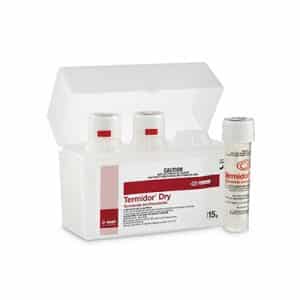 Termidor Dry Termiticide. Is the first termiticide and insecticide formulated with a revolutionary BASF patented MICROLOSE carrier to improve flowability and increase product palatability. This ensures it spreads throughout the Termite colony.

It is the most primitive termite alive. This termite shows similarities to cockroaches the termites' closest Cousins.

The Giant termite or giant Northern Termite . They can grow up to 13mm in size. As far as destructive ability these guys are definitely number one .This termite is by far the most destructive termite in Australia.   The reason they are not number one is that they are predominantly found in Northern parts of Australia, qld and the northern territory only. But if they make their way down the coast it would be disastrous and there has been a few occasions they were found on the gold coast but were thought to be bought down in railway sleepers.

They will eat almost anything.  They are known to eat rubber tyres  and cause damage to leather, hide, plastic or electrical cables, bitumen, bagged salt, flour, glass and even metals. It  is Northern Australia's most destructive termite  often causing major damage to houses, buildings, bridges, posts, poles, and killing trees.

Mastotermes ate all the ceiling timber in this home

Treatment used is only chemical as they dont shed baiting does not work on these guys. So let's hope they don't come to South East Queensland. 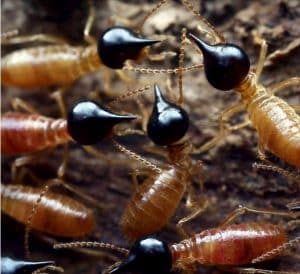 These termites are a hardwood species and feed predominantly on hardwood and that's where we find almost all of their nests . 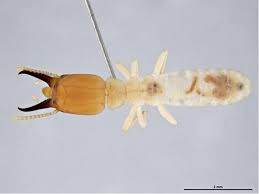 Nest Location  They build their colony nest next to stumps, logs, or other timber in direct contact with the soil where some wood decay or rotting is prevalent. This termite we find quite often in homes but in most cases don't do too much damage. In fact they do most damage to decaying timbers like fences , posts , retaining walls etc. These guys have some pretty amazing mud leads which can look like stalactites and stalagmites .

Firstly These are the most common ones people call us about and are not a major cause of structural damage to homes in Australia. You will see them in your retaining walls . Also in fences etc. Below is a typical microcerotermes nest.  They make nests in trees and nests on top of posts. most times we find the nest in gardens . 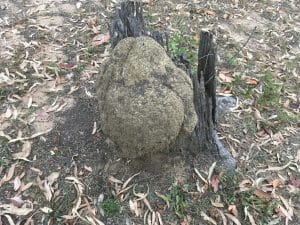 In fact these termites aren't too much too worry about as they generally only eat decayed timber. Additionally the treatment is relatively simple. Either you can treat them with a chemical or just break open the nest and expose the queen and the ants will take care of them.

typical Damage caused by these termites

Finally all the termites listed above are our subterranean termite species and we have other types which can cause significant damage in your home these are called drywood termites. 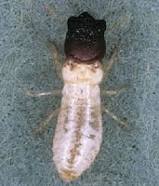 In the United States, this termite species causes damage over $100 million yearly, and a lot more than this worldwide. So we have to be vigilant and try and keep them under control. Cryptotermes brevis infests both softwood and hardwood timbers and structural wood in homes and wooden furniture. More than one colony can exist in a single structure and objects as small as picture frames . They excavate galleries through the timber but leave a thin veneer of surface wood intact.  Which makes them very difficult to find. In Fact One wooden door was found to have twenty colonies inside.  A mature colony may contain over a thousand termites and survive for upward of ten years.

The pictures above an below show frass or droppings left by this species. And this will indicate to us there might be a drywood termite infestation. We are not allowed to treat them we must take them to the DPI for identification and if it is positive they take over the treatment. We find them mainly in old Queenslanders and closer to the coast areas but we have found evidence in most brisbane suburbs. 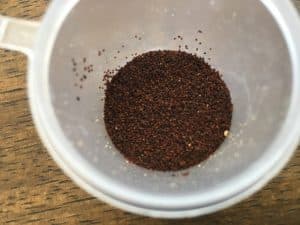 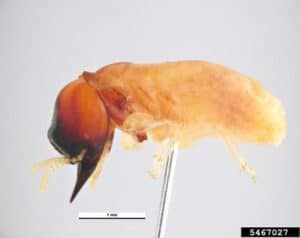 This species is a native to Australia .This species is a minor to moderate pest of structural timber in homes, house stumps, power poles.  The native drywood species Cryptotermes primus is distributed widely throughout coastal  areas and is common in most areas settled before 1940. Colonies have up to 200 individuals, generally with less than 10 soldiers. So as you can see they don't pose too much of a problem to our homes . But you still must be vigilant and have regular termite inspections and keep your termite protection up to date.