Rats and mice are ready to invade our homes and businesses

Rats and mice are gearing up to invade your home or business during the next few months. Firstly over the next few months it will be getting cooler and they like us need to shelter away from the cold to keep warm and nest. So it is pretty obvious where to find these warm conditions and it is our homes or businesses. Also there is usually an abundance of food for them to eat. So if you see a rat mouse around there will be generally quite a few not just one. We have had places that have had over 20 or more found after the rodent treatment.

Roadents How did they get here.

The Roof rat, Norwegian rat, Pacific rats and house mouse were accidentally introduced to Australia . So they would have arrived on the first settlers boats arriving in Australia from 1778 and have become a major problem. Rats and mice breed all year round. Also they can start breeding at a few months old and can reproduce up to 12 times a year and have up to 10 babies. So you can get as much as 250,000 offspring in 3 years off one breeding pair now that is impressive.

Health risks caused by rats and Mice. They pose a serious health risk to humans because they can carry and transmit disease. Rats and Mice can spread disease by: contaminating food or cooking utensils with their urine or faeces. This often causes Salmonella food poisoning. They also can spread disease causing pathogens the most famous of these is the Plague or Black Death. Thanks to modern hygiene standards and improved sanitation disease epidemics caused by rat mouse are rare.

Types of pest Rats and mice

Pest Rodents
The two types of pest rats and one mouse most commonly found in Brisbane are the large brown norwegian (Rattus norvegicus), and the smaller grey or black roof rat (Rattus rattus) and the house mouse ( Mus musculus ). Additionally both of these types of rats and mice can carry disease. Also the Common rat nests and burrows under buildings and is usually found in commercial farms . Or areas where there are animals , Rubbish Tips and the obvious sewers, rather than suburban areas. The black Rat or roof rat is the one homeowners encounter most of the time. 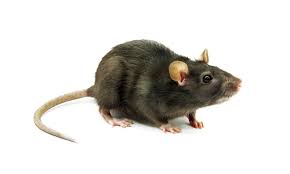 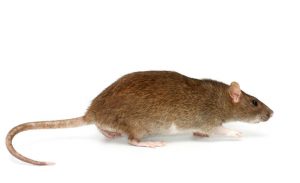 The Norway rat we encounter generally in suburban areas if you have chickens or other birds or animals as they steal the feed. These guys are larger than the roof rat. Also if you have a lot of stored rubbish and unkempt gardens etc. These guys are a problem for food outlets as they generally have plenty of food rubbish in large bins etc. The Norway Rat generally live communally in outdoor burrows. With a typical burrow having multiple entry and exit points dug under the floors of houses, sheds or other buildings, in banks, in piles of rubble or in rubbish heaps, compost heaps or refuse tips.

The house mouse, Mus musculus, ranges in colour from brown, grey to black and measures up to 9cm’s from head to body. They have large ears, a pointed nose, small eyes, small feet, sharp, flat teeth and a long tail that is darker in colour than the body. These rodents are omnivores but prefer seeds but will eat almost anything. The farming community have big problems with mice as they can destroy crops. They like their rat cousins can breed very quickly and spread disease.

The best form of treatment is exclusion which means blocking any access points to your home or business and removing any food sources. Don't leave piles of rubbish around, put food into containers and put rubbish in bins and dispose it regularly. 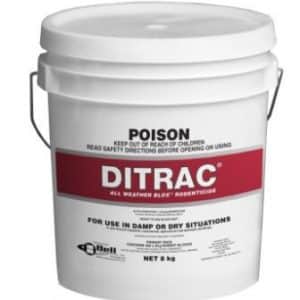 The main treatment is anticoagulant blocks

Most treatments today consist of anticoagulants with the actives like Brodifacoum in the form of blocks which are placed in tamper proof plastic stations to protect children an non target pests from consuming the bait. Brodifacoum reduces Vitamin K in the body which leads to decreased blood clotting ability. If clotting ability is reduced significantly, bleeding can occur which kills the rodents. This can take up to 4 days before the rodent dies. Mice are easier to control more quickly as they are more inquisitive and don't care about new things in their environment. So generally they will eat the bait straight away. But rats are more cautious to new things in their environment and can take up to a week before they feel comfortable and take the bait. So patience is the key with rats. 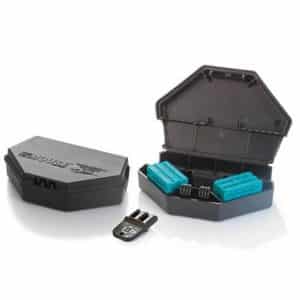 Almost all pest controllers use tamper proof plastic stations for the control of Rats and Mice . You must secure the poison blocks in the stations, this stops the rodents from dragging the bait out and potentially poisoning non target species, children and your pets. We do a little investigation to see where the rodents are going then place the stations in these areas. We always place one in the roof void as that is where most rodents go for shelter. As you can see in the picture below you can even get stations that look like rocks so they blend in with your gardens. 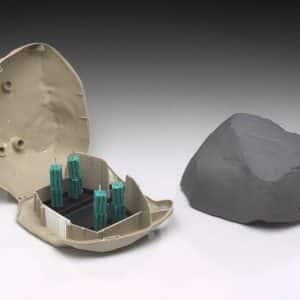 The Snap traps are the original way to catch rodents. The snap traps are the most used system for the D.I.Y market. But we sometimes have to use them especially in some commercial places where poisons cannot be used , but becomes expensive as we have to check them regularly and dispose of them. But there is some systems that electrocute the rodents and bags them straight away for collection at a later date once the bags are full. The system actually lets us know when they are full for collection , which is very handy. Using these systems is a little expensive for the domestic market but they have been used on occasions.

These Commercially prepared glue boards are designed to lure the rats and mice, so proper placement is important. When the rodents get caught, most rodents get their noses Stuck on the glue trap and die of suffocation. The glue boards are in the throws of getting banned  due to Prevention of Cruelty to Animals Regulation which the glue board won't be listed as being able to be used.

This is the most important part of any rodent treatment is the safety of you , your family and pets is imperative. Also the safety of wildlife must be considered before we do any rodent treatments and of course ourselves. We only use the tamper proof stations. This will stop any unwanted poisonings. The likelihood of secondary poisoning is very low also as your pets would have to consume at least 14 dead rats before they have any affect on them but if they do, a Vitamin K shot from the vet will sort that out.

Too book your Rodent treatment or you want to ask some questions in regards to the treatments . Give Vicki or Lauren a call on 07 32008586 or fill out the online form.

we do rat and mice control in Brisbane , Gold Coast , Logan and Ipswich.