Advice and identification on The Most Destructive Termites in SEQ

A CSIRO Survey says almost 1 in 3 buildings have termites within their property boundary and homes are more at risk if there are well-established trees within 100 metres of the Homes or buildings. The reason being termites nest in Trees, some have visible nests and others nest within the tree crown.

The Most Destructive Termites in SEQ

Termite damage to all Australian homes and buildings has increased dramatically since  1995 mainly due to construction methods eg: Concrete slab on ground construction and the phasing out of the toxic organochloride chemical under-slab treatments and With the increasing use of softwoods in construction and the drop in building standards. The increased use of landscaping timbers and fencing and the destruction of their habitat and food sources. So the pressures have increased in our homes and buildings. Termites cause in excess of a billion dollars year damage to homes, buildings and other structures. This is the reason you cannot get insured against damage caused by these destructive pests.

In this post, I will give a full list of our Most Destructive Termites in South East Queensland and ways for you to protect your Homes. Most Termites in Australia are Subterranean Termites, which means they live underground. To identify a termite specie we rely on the soldier termites as they are the most distinguishable as most worker termites are very hard to distinguish. Starting with Subterranean termites.

These guys may not be the most destructive but by sheer numbers, they cause the most damage to structures in Australia. Commonly found throughout Australia – and especially in south-east QLD along with coastal and urban areas and usually where there are gum trees. Yes Gum trees (hardwood)

There are a number 0f different species of Coptotermes throughout Australia but these White ants Cause more Damage than all the other species because they are more widespread and are a very secretive termite and don’t have visible nests. There are more destructive species in Australia and if they were more prevalent it would be disastrous to Australian Homes but we will get to them later. In this map the coptotermes are found within the orange, green and brown areas so as you can see they are quite adaptable in most climates.

This termite will cause rapid damage to homes if undetected and are usually only found by mistake when cleaning, renovating or doors fall off. Some people say they can hear them chewing at night, but what they are hearing is the termites communicating warning each other. They do this by shaking their heads which makes a clicking sound…Check out the video below you can hear them.

Areas Found in Australia: Commonly found in South East Queensland – Mainly along the entire coastline to just below Sydney.

Nest Locations -Very Similar to Coptotermes, Schedorhinotermes generally build their nests in tree stumps, in the root crown of the living, dead and dying trees They also nest in subfloors under houses or within any enclosed areas where timber has been buried or stored in contact with the soil.

Identification of this species is relatively easy with the soldiers and when you first find them, you can often see a major soldier (6mm in body length) and a minor soldier (4mm in body length). If you see both it is an indication that the colony is mature and there could be millions of worker termites and they can destroy homes in as little as 12 months and sometimes in a shorter time.

This specie, if it was more widespread, would equal or surpass the damage caused by coptotermes. We have found them in a lot of homes in Brisbane, Gold Coast and Ipswich areas and have had homes with over $100,000 worth of damage caused and even beyond repair.

We have had them destroy hardwood and Cypress framed homes, so don’t think you are safe if your homes are constructed from these timbers. In fact, our Most destructive termites hardwood is their preferred food. Even steel framed homes are at risk because there is plenty of timber elements in them.

Areas Found: Commonly found in southern areas of Queensland and NSW, ACT, Victoria and Western Australia – Found in urban areas or where trees are highly prevalent. These guys have visible nests usually in trees and ground nests which makes it a lot easier to treat and to eliminate the colony. This is probably one of the main reasons why they don’t get put in the same class as the other two.

Destruction – Nasutitermes can be very destructive to buildings, homes and other timber structures if not detected. Sometimes severe damage can occur, but not so much as the nests are usually visible. We always advise treating visible nests as this will take the pressure off your homes. I get told by a lot of people if we leave them alone they won’t come to my house but this is not advisable as termites need to feed their ever-growing colony and are always foraging around for new food sources and our homes and buildings are a smorgasbord for them.

Visible Nests is the main reason these guys aren’t classed as a major Destructive Termite, but they can cause severe damage to the home if undetected. 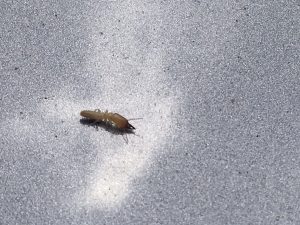 Areas found:  found throughout South East Qld, NSW, the ACT, Victoria, and southern parts of South Australia and Western Australia – Mostly found in urban areas or where trees are highly prevalent. This termite is hard to identify and can get confused with Microcerotermes but these guys aren’t classed in the major destructive category.

Nest Location – Heterotermes will build their colony nest next to stumps, logs and in trees or other timber in direct contact with the soil where some wood decay or rotting is present.

Destructive Nature – Heterotermes are destructive to damp timbers and are usually found attacking fences, poles and other timber structures that have wood decay from weathering or from being in contact with the soil. This species can be confused with the less aggressive and destructive microcerotermes species.

Both these species are found attacking retaining walls fences and landscaping timbers that are decayed and they are a smaller termite compared to the major ones.

They can cause damage to homes but it is unusual to find major damage but does happen on occasions.

We recommend they get treated when found in your yard as they can cause damage to your home.

Last but not least Number 5 Microcerotermes..

Very similar to number 4 and our least destructive out of the subterranean termites but as mentioned above they can cause damage to decayed fences, landscaping timbers and retaining walls. Generally, the colonies a small compared to the other species and if you find the nest they are really easy to treat. Micros Rarely attack homes and if they do they will take a long time to do any significant damage.

The native dry wood termite Cryptotermes
primus is found throughout coastal areas and is
common in most areas settled before 1940. It attacks the dead-wood of living trees and
timber in our homes. Colonies have up to 200 Termites and less than 10
soldiers. These Termites aren’t considered a major destructive termite.
Soldiers are a creamy colour, 4–6 mm
long with short, thick, dark heads. Alates
(winged reproductives) are pale yellow-brown with wings. They can cause damage to house stumps, flooring, skirting boards,  support beams, furniture and fences.
The local dry wood termite is  common
in the house stumps.

Here is one of the worlds most destructive termites and they have landed on our shores. If we find them we must report them to DAF who take over and treat them. They are trying to eradicate this species because if they get a foothold in Australia it will be a disaster. I have only found them 3 times and all have been in the Manly Wynnum areas. They can literally fly into your home and start a colony as they don’t need ground contact and they get all their food needs including moisture from the timber in your homes. An indication they are in your home is the presence of Faecal Pellets.

Let’s just hope they can get rid of these guys because they can cause some serious damage. 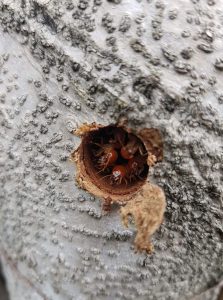 Mastotermes darwiniensis, some of the names they go by, giant northern termite, the super termite and Darwin termite, and it is mainly found only in northern Australia. It is the most primitive termite alive. They have been found a few times in SEQ but let’s hope they don’t make it to our homes in SEQ. And they are hungry blighters and will eat just about anything and have been known to eat rubber tyres, leather, hide, plastic or electrical cables and even bitumen. These guys are the reason there is hardly any crop farming up north. Well, that’s about it for our destructive termites and we all have to be vigilant at keeping our homes safe from these destructive pests because they do not discriminate they will quite happily destroy any building given the chance.